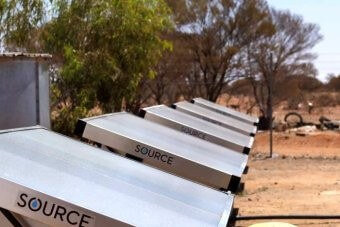 
A fight for safe drinking water at Buttah Windee in Western Australia has been a fight for the survival of the community, and a battle they are proud to have won on their own.

The remote Aboriginal community is 760 kilometres north-east of Perth on the outskirts of Meekatharra.

Almost a decade ago, resident Andrew Binsiar discovered the community's water was tainted with naturally occurring uranium at more than twice the national health standard.

"I was actually very surprised," he said.

"You'd imagine people would test the water for human consumption before people are allowed to drink it."

Unable to drink the community's tap water, most of the 50 people who lived at Buttah Windee left.

Too expensive to fix: State Government

But for Andrew Binsiar and his wife Janine, leaving the home where they had raised their five children was not an option.

He turned to the State Government for help, but was told fixing the water supply would be too expensive.

"They come out and put up 'do not drink the water' signs and that was their solution to it," Mr Binsiar said.

The State Government offered to move the remaining residents into state housing in Meekatharra, but Mr Binsiar was apprehensive about exposing his family to the town's social issues.

"We knocked them back … for the simple reason I'd already been there and done that. My life changed when I moved here," he said.

"I wasn't a very good father when I lived in Meeka."

Almost a decade on, Buttah Windee is the first remote Aboriginal community in Australia to use innovative technology for its water supply.

Six solar hydropanels have been installed at the outback community, donated by a WA company who heard about the community's plight and wanted to help out.

Director of Wilco Electrical Frank Mitchell said the units captured water from the air and produced up to 900 litres of water a month.

"Those fans, you can hear them whirring away, are just drawing in air all day, all around, and the piece of material inside collects … the moisture in the air, then condenses down into the tank where it's got a pump straight out to the tap," he said.

Mr Binsiar said it was a simple idea, which should be introduced to all remote communities.

"Water is a basic human right that everyone deserves," he said.

"It could mean better health for your children … I would guarantee that most communities have bad water."

The near decade-long battle for clean drinking water has not come easily for the Buttah Windee residents, with Mr Binsiar turning to crowdfunding as a last resort.

"It was a huge success. The Australian public have been awesome," he said.

"Reverse osmosis takes out all the contaminants in the water … on the back end of it, it puts the minerals your body needs back into the water," he said.

"They've given us a chance where no-one else would and we are really proud of what we have done here."

Mr Binsiar and several residents built the fish farm hoping it would eventually provide local employment and a potential source of income.

"Hopefully we can continue on and make it bigger and provide this region with fresh barramundi," he said.

"I'd like to welcome everyone out to Buttah Windee and come and look at the work we do."