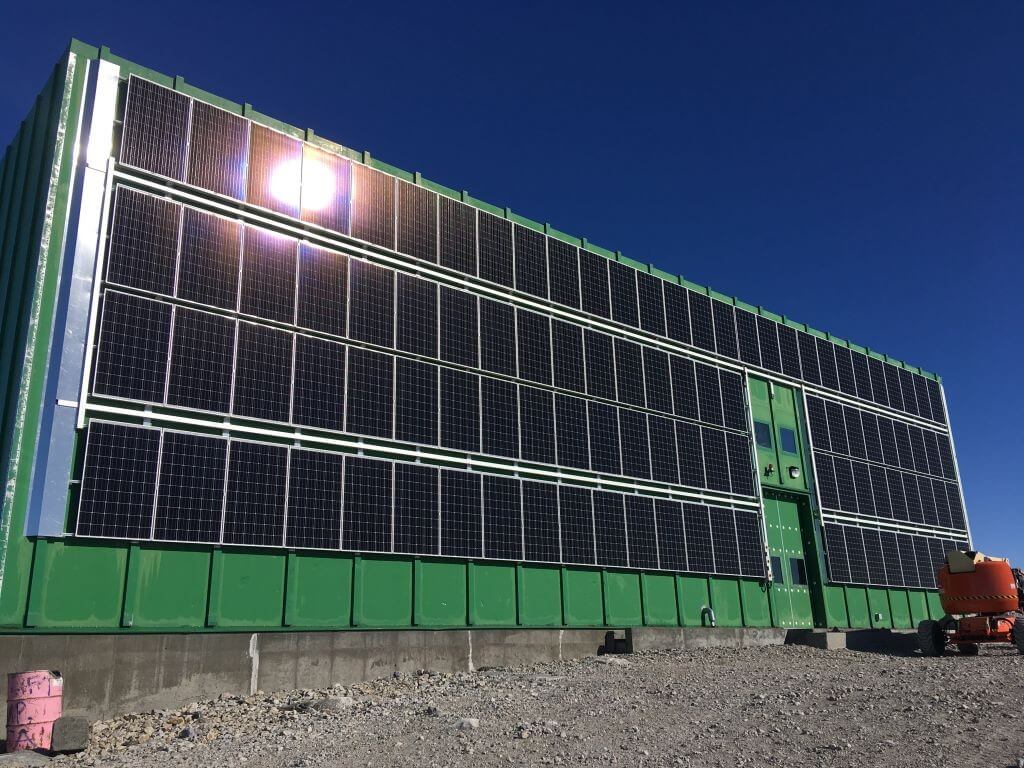 March 19 - The first Australian solar farm in Antarctica will be switched on at Casey research station today.

Australian Antarctic Division Director, Mr Kim Ellis, said the system of 105 solar panels, mounted on the northern wall of the ‘green store’, will provide 30 kilowatts of renewable energy into the power grid – about 10 per cent of the station’s total demand over a year.

“This is the first solar power array at an Australian Antarctic research station and amongst the largest in Antarctica,” Mr Ellis said.

“It will reduce Casey station’s reliance on diesel generators for electricity, cutting fuel costs and emissions, as well as boosting the station’s capacity in peak periods.”

The project is a collaboration between the Australian Antarctic Division and Masdar, the Abu Dhabi Future Energy Company, to investigate a range of energy efficiency and energy management options at Australia’s Antarctic stations.

Mohamed Jameel Al Ramahi, Chief Executive Officer of Masdar, said the project was an opportunity to pool energy-efficiency expertise from the hot deserts of the Middle East and the cold desert of Antarctica.

“This project will help to build expertise in, and the performance of, solar systems in cold and remote environments,” Mr Al Ramahi said.

“It will test the durability and suitability of the solar panels to the strong wind and snow load in Antarctica and help us to determine if it is an efficient way of powering a station.”

Engineering Services Supervisor at Casey, Doreen McCurdy, said her six-person team first installed the brackets and rails to hold the panels flush against the wall.

The team faced some challenging conditions with temperatures as low as -7°C and a number of blizzards.

“The cold was a challenge, as the brackets and bolts are small and fiddly and can’t be installed while wearing gloves, so we had to use hand warmers to keep our fingers nimble,” Ms McCurdy said.

“On windy days we had to focus on the internal installation, as the elevated work platform we use outside can’t operate in winds above 15 knots.

“Once all the rails and brackets were in place though, we were able to install about 15 panels a day.”

While the panel installation is unusual in its flush mounting against a wall, it has been designed to strike a balance between maximum solar gain and stability in the wind, as well as ensuring the panels are easy to install, access and maintain.

There are now plans to look at connecting the panels up to a battery storage system and whether solar farms might be suitable for use at Australia’s other stations.

“Once the solar system is running we’ll see an immediate energy contribution and we’ll be able to see how it performs as part of the station’s power grid,” Mr Ellis said.

“From there we can then look at how to get more out of the technology in the future.”