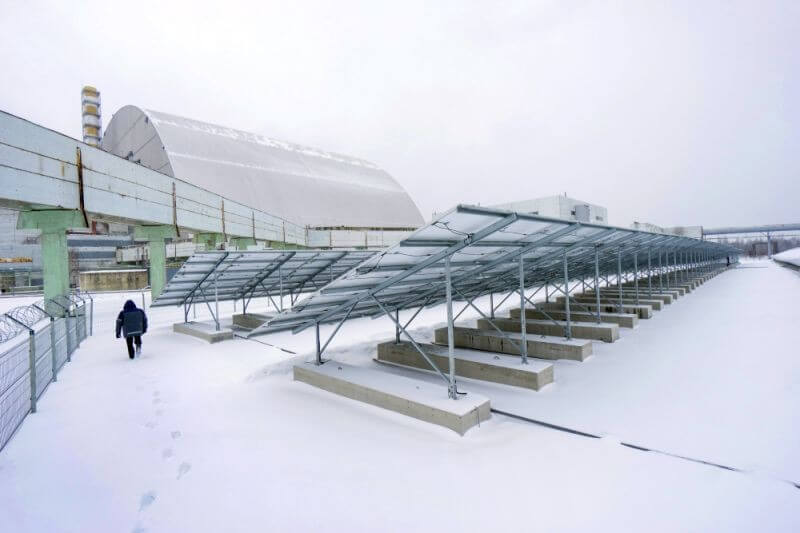 (Bloomberg) -- For two decades, coal has been pulled from a Bent Mountain mine in eastern Kentucky. But in a startling move in the heart of coal country, a rival -- solar -- is preparing to move on to the land.

From Appalachia in the U.S. to Queensland in Australia and Chernobyl in Ukraine, solar and wind farms are being developed or built in places not normally associated with clean energy, and in some regions long resistant to it.

Slapping solar panels atop so-called brownfield sites, land that housed mines, emissions-belching power plants or were tarnished by nuclear disaster, can be cheaper than decontaminating the ground and turning it into parkland. At the same time, there’s the prospect of turning environmental foes into friends.

“We’re essentially turning these drains on a community into an asset,” said Chad Farrell, chief executive officer of Encore Renewable Energy, a Vermont-based developer that’s contemplating installing solar arrays at coal-ash ponds across Appalachia. “You’re not going to get a large revenue-generating asset on a former landfill.”

Solar is already established within the nuclear zone of Chernobyl, at a massive former coal-fired power plant in Canada, and at landfills and other brownfield sites throughout New England, where renewables are popular but land is at a premium. Meanwhile, BHP Group, the world’s biggest mining company, is working on permits and engineering plans to turn legacy sites in Arizona and New Mexico into solar and storage facilities.

“It’s emblematic of the transition from old forms of energy to new,” said Jacob Susman, a vice president at developer EDF.

Regions long dependent on traditional energy sources for jobs and tax revenue are increasingly turning to solar and wind power, cementing their push into the mainstream at a time when the coal industry is ailing. U.S. power produced from burning coal shrank by 6.3 percent in 2018, as almost 13 gigawatts of coal plants were closed, according to BloombergNEF. That’s second only to 2015 when 15 gigawatts of coal-fired plants were shuttered.

“It’s land no one else wants.” said Jenny Chase, a Zurich-based analyst at BloombergNEF.

In Queensland, Genex Power Ltd. is already producing enough energy for almost 26,500 homes from a 50-megawatt solar farm at the disused Kidston gold mine, where metal was discovered in the early 1900s and operations finally shuttered in 2001. Genex, which acquired the site from Barrick Gold Corp., plans to add a second, 270-megawatt solar array, a 250-megawatt pumped-hydro facility and a 150-megawatt wind operation.

The pumped-hydro plant will utilize two existing mine pits, using off-peak solar or grid power to move water from a lower reservoir to a second, higher storage pool, and then release it during periods of peak demand to cascade over two turbines to produce power. During periods of generation, the site will provide enough power for about 280,000 homes, Genex executive director Simon Kidston said.

The Queensland transformation, meanwhile, could be modeled at other historic mining sites, according to Australia’s Clean Energy Finance Corp., which provided debt funding to the project’s initial stage. At Australia’s former Drayton coal mine, about 150 miles (241 kilometers) north of Sydney, Malabar Coal Ltd. is planning to develop a 25-megawatt solar farm.

In eastern Kentucky, active mining at the Bent Mountain site is slated to conclude in late summer, said Ian Krygowski, a development director at EDF Renewables, which is developing a 100-megawatt solar farm there. The site, tucked among wooded mountains, will undergo reclamation work to make it a series of plateaus hospitable for solar.

Next year, a modest 3.5-megawatt solar farm in southwest Virginia is slated to replace a mine that closed in 1957. Developer Sun Tribe Solar is collaborating on the project with several groups including regional environmental group Appalachian Voices on the project in Wise County.

“The land is so scarred from the extractive industries that have been the primary economic driver,” said Chelsea Barnes, a new economy program manager at Appalachian Voices. “It’s an important visual to show the region that it can still be energy-producing but in a way that doesn’t degrade the land and pollute the air.”

For the solar industry, building at sites of former power plants and some legacy mines is an opportunity to tap into existing grid infrastructure. But it’s also an acknowledgment of land limitations. Some places have limits on how much solar can be built in agricultural areas, said Chase of BNEF.

“The narrative has been that those green jobs are going someplace else,” Krygowski said. “It doesn’t have to be that way.”

--With assistance from David Stringer.

To contact the reporter on this story: Brian Eckhouse in New York at beckhouse@bloomberg.net